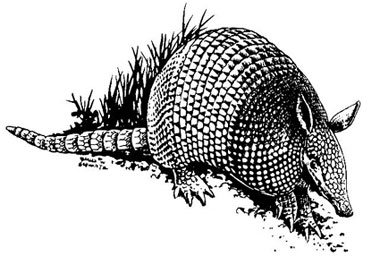 The armadillo (Dasypus novemcinctus) is a rather interesting and unusual animal that has a protective armor of “horny” material on its head, body, and tail. This bony armor has nine movable rings between the shoulder and hip shield. The head is small with a long, narrow, pig-like snout. Canine and incisor teeth are absent. The peg-like cheek teeth range in number from seven to nine on each side of the upper and lower jaw. The long tapering tail is encased in 12 bony rings. The track usually appears to be three-toed and shows sharp claw marks. The armadillo is about the size of an opossum, weighing from 8 to 17 pounds (3.5 to 8 kg).

The armadillo is active primarily from twilight through early morning hours in the summer. In winter it may be active only during the day. The armadillo usually digs a burrow 7 or 8 inches (18 or 20 cm) in diameter and up to 15 feet (4.5 m) in length for shelter and raising young. Burrows are located in rock piles, around stumps, brush piles, or terraces around brush or dense woodlands. Armadillos often have several dens in an area to use for escape.

The young are born in a nest within the burrow. The female produces only one litter each year in March or April after a 150-day gestation period. The litter always consists of quadruplets of the same sex. The young are identical since they are derived from a single egg.

The armadillo has poor eyesight, but a keen sense of smell. In spite of its cumbersome appearance, the agile armadillo can run well when in danger. It is a good swimmer and is also able to walk across the bottom of small streams.

The armadillo ranges from south Texas to the southeastern tip of New Mexico, through Oklahoma, the southeastern corner of Kansas and the southern third of Missouri, most of Arkansas, and southwestern Mississippi. The range also includes southern Alabama, Georgia, South Carolina, and most of Florida (Fig. 2). 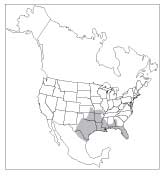 The armadillo prefers dense, shady cover such as brush, woodlands, forests, and areas adjacent to creeks and rivers. Soil texture is also a factor in the animal’s habitat selection. It prefers sandy or loam soils that are loose and porous. The armadillo will also inhabit areas having cracks, crevices, and rocks that are suitable for burrows.

More than 90% of the armadillo’s diet is made up of insects and their larvae. Armadillos also feed on earthworms, scorpions, spiders, and other invertebrates. There is evidence that the species will eat some fruit and vegetable matter, such as berries and tender roots in leaf mold, as well as maggots and pupae in carrion. Vertebrates are eaten to a lesser extent, including skinks, lizards, small frogs, and snakes, as well as the eggs of these animals.