The bobcat (Lynx rufus), alias “wildcat,” is a medium-sized member of the North American cat family. It can be distinguished at a distance by its graceful catlike movements, short (4-to 6-inches [10-to 15-cm]) “bobbed” tail, and round face and pointed ears (Fig. 1). Visible at close distances are black hair at the tip of the tail and prominent white dots on the upper side of the ears. 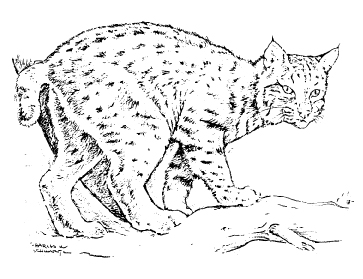 Body hair color varies, but the animal’s sides and flanks are usually brownish black or reddish brown with either distinct or faint black spots. The back is commonly brownish yellow with a dark line down the middle. The chest and outside of the legs are covered with brownish to light gray fur with black spots or bars. Bobcats living at high elevations and in northern states and Canada have relatively long hair. In southern states, bobcats may have a yellowish or reddish cast on their backs and necks.

The Canada lynx appears more slender and has proportionately larger feet than the bobcat. At close distances, the ear tufts of the lynx can be seen. The tail of the lynx appears shorter than the bobcat’s and its tip looks like it was dipped in black paint. The bobcat’s tail is whitish below the tip. Lynx commonly occur in Canada’s coniferous forests and, rarely, in the Rocky Mountains. Where both species occur, lynx occupy the more densely forested habitats with heavy snow cover.

The skull has 28 teeth. Milk teeth are replaced by permanent teeth when kittens are 4 to 6 months old. Females have 6 mammae.

Bobcats are secretive, shy, solitary, and seldom seen in the wild. They are active during the day but prefer twilight, dawn, or night hours. Bobcats tend to travel well-worn animal trails, logging roads, and other paths. They use their acute vision and hearing for locating enemies and prey.

Bobcats do not form lasting pair bonds. Mating can occur between most adult animals. In Wyoming, female bobcats reach sexual maturity within their first year but males are not sexually mature until their second year. Nationwide, breeding can occur from January to June. In Wyoming, breeding typically begins in February and the first estrus cycle in mid-March. The gestation period in bobcats ranges from 50 to 70 days, averaging 62 days.

Nationwide, young are born from March to July, with litters as late as October. The breeding season may be affected by latitude, altitude, and longitude, as well as by characteristics of each bobcat population. In Wyoming, births peak mid-May to mid-June and can occur as late as August or September. These late litters may be from recycling or late-cycling females, probably yearlings. In Utah, births may peak in April or May. In Arkansas, births may peak as early as March.

Bobcats weigh about 2/3 pound (300 g) at birth. Litters contain from 2 to 4 kittens. Kittens nurse for about 60 days and may accompany their mother through their first winter. Although young bobcats grow very quickly during their first 6 months, males may not be fully grown until 1 1/2 years and females until 2 years of age. Bobcats may live for at least 12 years in the wild.

Bobcats reach densities of about 1 per 1/4 square mile (0.7 km2) on some of the Gulf Coast islands of the southeastern United States. Densities vary from about 1 per 1/2 square mile (1.3 km2) in the coastal plains to about 1 cat per 4 square miles (10.7 km2) in portions of the Appalachian foothills. Mid Atlantic and Midwestern states usually have scarce populations of bobcats.

The social organization and home range of bobcats can vary with climate, habitat type, availability of food, and predators. Bobcats are typically territorial and will maintain the same territories throughout their lives. One study showed home ranges in south Texas to be as small as 5/8 square mile (1.0 km2). Another study showed that individual bobcats in southeastern Idaho maintain home ranges from 2.5 square miles to 42.5 square miles (6.5 km2 to 108 km2) during a year. Females and yearlings with newly established territories tend to have smaller and more exclusive ranges than males. Females also tend to use all parts of their range more intensively than adult males.

Adult bobcats are usually found separately except during the breeding season. Kittens may be seen with their mothers in late summer through winter. An Idaho study found adult bobcats and kittens in den sites during periods of extreme cold and snow. Females with kittens less than 4 months old generally avoid adult males because they kill kittens.

Since the late 1970s, several state game agencies have been tagging bobcat pelts harvested in their states. Information from these pelts is being used to estimate bobcat population trends and factors that contribute to those changes.

The bobcat occurs in a wide variety of habitats from the Atlantic to the Pacific ocean and from Mexico to northern British Columbia (Fig. 2).It occurs in the 48 contiguous states. 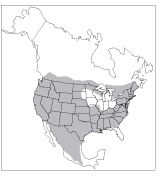 The bobcat is as adapted to subtropical forests as it is to dense shrub and hardwood cover in temperate climates. Other habitats include chaparral, wooded streams, river bottoms, canyon lands, and coniferous forests to 9,000 feet (2,743 m). Bobcats prefer areas where these native habitat types are interspersed with agriculture and escape cover (rocky outcrops) close by. The bobcat has thrived where agriculture is interspersed through the above native habitat types, as in southern Canada.

Bobcats are capable of hunting and killing prey that range from the size of a mouse to that of a deer. Rabbits, tree squirrels, ground squirrels, wood rats, porcupines, pocket gophers, and ground hogs comprise most of their diet. Opossums, raccoon, grouse, wild turkey, and other ground-nesting birds are also eaten. Occasionally, insects and reptiles can be part of the bobcat’s diet. In Canada, the snowshoe hare is the bobcat’s favorite fare. Bobcats occasionally kill livestock. They also resort to scavenging.