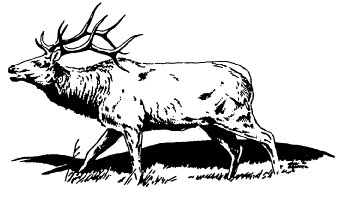 The elk is a large, powerful animal with an adult weight averaging over 400 pounds (180 kg) (Fig. 1). Pelage (hair coat) is light to dark reddish brown on the body, a darker brown on the neck and legs, and creamy on the large rump patch. Males bear large, impressive antlers with six or more tines branching from two heavy central beams.

Weather and human activities influence elk activity. Where no hunting is allowed, elk readily habituate to humans and may be observed foraging during daylight hours. Otherwise, elk tend to forage primarily in the early morning hours, in late afternoon, and during the night. They also forage more on warmer south-facing slopes during daylight hours in colder months, retiring to the thick protective cover of conifer/deciduous forests in early afternoon. In summer, elk forage early in the day when temperatures are lower and seek refuge from mid-day heat and insects in cooler riparian areas or forested, windswept ridge tops.

Elk use a variety of habitats and habitat components (slope, aspect) to optimize feeding opportunities, thermal regulation, and protection from predation. This flexibility is closely associated with the impact elk have on domestic hay, grain crops, and on pastures shared with domestic livestock. For example, spring migration coincides with the development of new growth of succulents, which concentrates feeding in pastures and grain crops and leads to heightened levels of damage.

The breeding season (rut) begins in late summer, when dominant males (bulls) herd “harems” of cows together for breeding. Cow elk may breed as yearlings, but many breed first as 2-year-olds. A single calf is born about 250 days following conception.

The Rocky Mountain elk (Cervus elaphus nelsoni) is found in the Rocky Mountain states and in scattered locations in the Midwest and East (Fig. 2). The current distribution of the Roosevelt elk (C. e. roosevelti) is the inland coastal areas of northern California, Oregon, Washington, Vancouver Island, British Columbia, and Afognak Island, Alaska. The Tule elk (C. e. nannodes) is found only in California, and the Manitoban elk (C. e. manitobensis) is found in Manitoba and Saskatchewan.

Although elk once roamed freely into lower elevation grasslands, they are now found primarily close to heavily forested areas that are dotted with natural or human-made (clear-cut) openings. Typically, elk use the openings to forage for food. Elk seek the shelter of dense stands of conifer and deciduous trees for protection from temperature extremes, predation, and harassment by humans. Elk usually spend their summers at higher, cooler elevations. In fall, they migrate along traditional corridors (2 to 80 miles [3 to 133 km]) long to lower elevations to escape weather extremes and snow depths that prohibit foraging in winter. Some herds are not migratory, spending the entire year within fairly well-defined and restricted areas.

Elk graze on grasses and forbs, and browse on shrubs, tree seedlings, and saplings. Diet is variable, depending on the availability and nutritive content of forages. Elk dietary preferences often overlap those of domestic and other wild ungulates. Where both grasses and shrubs are available, elk may favor grasses. When snow reaches sufficient depth to cover grasses and shrubs, elk are forced to rely on conifer seedlings and saplings, and bark and twigs of deciduous trees, such as aspen. Wind-fallen branches and attached arboreal lichens are an important energy source in winter.