Although wildlife management concepts were formed nearly 100 years ago, bears and their management have been poorly understood. Recent concern for the environment, species preservation, and ecosystem management are only now starting to affect the way we manage grizzly/brown bears (Ursus arctos, Fig. 1). Indeed, the difficulty in understanding brown bear biology, behavior, and ecology may have precluded sufficient change to prevent the ultimate loss of the species south of Canada. Grizzly/brown bears must be managed at the ecosystem level. The size of their ranges and their need for safe corridors between habitat units bring them into increasing conflict with people, and there seems to be little guarantee that people will sufficiently limit their activities and land-use patterns to reduce brown bear damage rates and the consequent need for damage control. Drastic changes may be needed in land-use management, zoning, wilderness designation, timber harvest, mining, real estate development, and range management to preserve the species and still meet damage control needs. 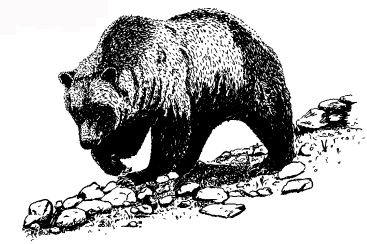 The brown bears of the world include numerous subspecies in Asia, Europe, and North America. Even the polar bear, taxonomically, may be a white phase of the brown bear. Support for this concept is provided by new electrophoresic studies and the fact that offspring of brown/polar bear crosses are fertile. The interior grizzly (Ursus arctos horribilis) is generally smaller than the coastal (Ursus arctos gyas) or island (Ursus arctos middendorffi) subspecies of North American brown bear, and it has the classic “grizzled” hair tips.

Brown bears in general are very large and heavily built. Male brown bears are almost twice the weight of females. They walk with a plantigrade gait (but can walk upright on their hind legs), and have long claws for digging (black bears and polar bears have sharper, shorter claws). The males can weigh up to 2,000 pounds (900 kg), but grizzly males are normally around 400 to 600 pounds (200 to 300 kg). Wherever brown bears live, their size is influenced by their subspecies status, food supply, and length of the feeding season. Bone growth continues through the sixth year, so subadult nutrition often dictates their size potential.

Brown bears are typically brown in color, but vary from pure white to black, with coastal brown bears and Kodiak bears generally lighter, even blonde or beige. The interior grizzly bears are typically a dark, chocolate brown or black, with pronounced silver tips on the guard hairs. This coloration often gives them a silvery sheen or halo. They lack the neck ruff of the coastal bears, and grizzlies may even have light bands before and behind the front legs. Some particularly grizzled interior brown bears have a spectacled facial pattern similar to that of the panda or spectacled bears of Asia and South America.

White grizzlies (not albinos) are also found in portions of Alberta and Montana, and in south-central British Columbia. Such white brown bears may be genetically identical to the polar bear, but so far electrophoresic studies have not been completed to determine the degree of relatedness.

The interior grizzly’s “hump,” an adaptation to their digging lifestyle, is seen less in the coastal brown bears, polar bears, or black bears. The brown bears (including the grizzly) are also characterized by their high eye profile, dish-shaped face, and short, thick ears.

Brown bears are typical of all bears physiologically, behaviorally, and ecologically. They are slow growing and long-lived (20 to 25 years). Their ability to store and use fat for energy makes long denning periods (5 to 7 months) possible. During denning they enter a form of hibernation in which their respiration rate (approximately 1 per minute) and heart rate (as low as 10 beats per minute) are greatly reduced. Their body temperature remains just a few degrees below normal; they do not eat, drink, defecate, or urinate, and their dormancy is continuous for 3 to 7 months. The adaptive value of winter denning relates to survival during inclement weather, when reduced food availability, decreased mobility, and increased energy demands for thermoregulation occur.

In most populations, brown bears breed from mid-May to mid-July. Both males and females are polygamous, and although males attempt to defend females against other males, they are generally unsuccessful. Implantation of the fertilized ova is delayed until the females enter their dens, from late October to November. One to three (usually two) cubs are born in January in a rather undeveloped state. They require great care from their mothers, which leads to strong family bonding and transfer of information from mothers to offspring. Brown bears may not produce young until 5 to 6 years of age and may skip 3 to 6 years between litters. Because of their low reproductive potential, bear populations cannot respond quickly to expanded habitats or severe population losses.

During the breeding season, male and female grizzly/brown bears spend considerable time together, and family groups break up. The young females are allowed to remain in the area, taking over a portion of their mother’s range. They are not threatened by the males, even though they are still vulnerable without their mother’s protection. The young males, however, must leave or be killed by the adult males. Many subadult males disperse into marginal bear habitats while trying to establish their own territories. This often leads to increased human-bear conflicts and the need for management and control actions.

Home ranges vary in size, shape, and amount of overlap among individuals. Abundance and distribution of food is the major factor determining bear movements and home range size. Home ranges are smallest in south-eastern Alaska and on Kodiak Island. The largest home ranges are found in the Rocky Mountains of Canada and Montana, the tundra regions of Alaska and Canada, and the boreal forest of Alberta. In areas where food and cover are abundant, brown bear home ranges can be as small as 9 square miles (24 km2). Where food resources are scattered, the ranges must be at least ten times larger to provide an adequate food base.

Some bears establish seasonal patterns of movement in relation to dependable high-calorie foods sources, such as salmon streams and garbage dumps. Such movements are likely to place bears in close contact with humans. In addition to finding food, bears spend considerable time in attempting to detect people, evaluating situations, and taking corrective actions to avoid conflict with humans. People, on the other hand, typically go noisily about their business, often without ever knowing that a bear is nearby. 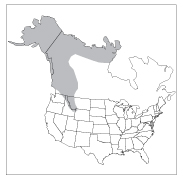 The brown bears of North America have lost considerable range, and are currently restricted to western Canada, Alaska, and the northwestern United States (Fig. 2). Their populations are considered secure in Canada and Alaska, but have declined significantly in the lower 48 states. Before settlement, 100,000 brown bears may have ranged south of Canada onto the Great Plains along stream systems such as the Missouri River, and in isolated, small mountain ranges such as the Black Hills of South Dakota. They were scattered rather thinly in Mexico and in the southwestern United States, but may have numbered about 10,000 in California, occupying the broad, rich valleys as well as the mountains.

A few brown bears (the “Mexican” or “California” grizzly) may still exist in northern Mexico. Occasionally, barren-ground grizzlies are found hunting seals on the sea ice north of the Canadian mainland. The barren-ground grizzlies appear to be brown bear/ polar bear crosses, and could represent an intergraded form. Brown bears also occur on three large islands in the gulf of Alaska, and are isolated geographically from very similar coastal brown bears.

A nearly isolated population (the Yellowstone grizzly) occurs in southern Montana, Wyoming, and southern Idaho. There could still be a few grizzlies in the mountains of southwestern Colorado, and a few still range out onto the prairies of Alberta and Montana, where the extinct Plains grizzly used to roam.

Grizzly/brown bear habitat is considerably varied. Brown bears may occupy areas of 100 to 150 square miles (140 to 210 km2), including desert and prairie as well as forest and alpine extremes. The areas must provide enough food during the 5 to 7 months in which they feed to meet their protein, energy, and other nutritional requirements for reproduction, breeding, and denning. They often travel long distances to reach seasonally abundant food sources such as salmon streams, burned areas with large berry crops, and lush lowlands.

Denning habitats may be a limiting factor in brown bear survival. Grizzly bears seek and use denning areas only at high elevations (above 6,000 feet [1,800 m]), where there are deep soils for digging, steep slopes, vegetative cover for roof support, and isolation from other bears or people. Since grizzlies select and build their dens in late September, when their sensitivity to danger is still very high, even minor disturbances may deter the bears from using the best sites. Unfortunately, the habitat types bears choose in September are scarce, and human recreational use of the same high-elevation areas is increasing.

Travel corridors connecting large areas of grizzly habitat to individual home ranges are critical for maintaining grizzly populations. Adequate cover is also needed to provide free movement within their range without detection by humans. The land uses with the greatest impact on bear habitats and populations include road development, mining, clear-cut logging, and real estate development.

Coastal brown bears use totally different habitats than the interior grizzly. They establish home ranges along coastal plains and salmon rivers where they feed on grasses, sedges, forbs, and fish. While the fishing brown bears may use very small ranges for extended periods, almost all bears make occasional, long-distance movements to other areas where food is abundant. This far-ranging behavior often leads to unexpected human-bear conflicts far from typical brown bear range.

Social factors within bear populations influence habitat value—the removal of one dominant bear or the sudden deaths of several bears can cause the remaining bears to greatly alter their habitat-use patterns. Such changes occur simply because the social hierarchy within bear populations typically gives large bears dominance over the smaller ones, and each bear uses its range based on its relationship to the other bears in the area.

Food gathering is a top priority in the life of grizzly/brown bears. They feed extensively on both vegetation and animal matter. Their claws and front leg muscles are remarkably well adapted to digging for roots, tubers, and corms. They may also dig to capture ground squirrels, marmots, and pocket gophers. Brown bears are strongly attracted to succulent forbs, sedges, and grasses. In spring and early summer they may ingest up to 90 pounds (40 kg) of this high-protein forage per day. Bears gain their fat reserves to endure the 5- to 7-month denning period by feeding on high-energy mast (berries, pine nuts) or salmon. The 2 1/2- to 3-month summer feeding period is particularly crucial for reaching maximum body frame and preparing for the breeding season and winter.

Being ultimate opportunists, brown bears feed on many other food items. For example, the Yellowstone grizzlies have clearly become more predatory since the closure of the garbage dumps in the Yellowstone area. They are exploiting the abundant elk and bison populations that have built up within the park. They hunt the elk calves in the spring, and some bears learn to hunt adult elk, moose, and even bison. The ungulate herds, domestic sheep, and cows also provide an abundant carrion supply each spring—the animals that die over winter thaw out just when the bears need a rich food source.

Bears are adept at securing food from human sources such as garbage dumps, dumpsters, trash cans, restaurants, orchards, and bee yards. Some bears learn to prey on livestock, especially sheep that graze on open, remote rangeland.