You describe a major problem in the pecan industry—predation by birds. A major legal concern for management efforts is the federal Migratory Bird Treaty Act of 1918 that protects most bird species, including crows. There are similar state laws that protect most birds. We would strongly suggest that you implement non-lethal control techniques while applying for a depredation permit from your state’s wildlife agency or the state office of USDA-Wildlife Services. 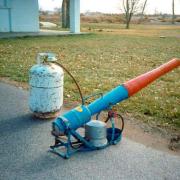 Propane cannon used to frighten birds and other wildlife from sensitive areas. Image courtesy of the University of Nebraska-Lincoln.

It is critical to act quickly when bird damage begins as large numbers of birds can appear, and the longer birds use a feeding site, the harder it is to disperse them. Non-lethal techniques include propane cannons, cracker shells, hawk kites, netting, and Mylar tape. The flying hawk kites are very realistic and seem to work well in apple orchards. Mylar tape glitters and shakes in the wind and seems to scare the birds as well. Understand that all visual and acoustic repellent techniques have limited effectiveness, but work best when you combine them to overwhelm the birds’ senses. Even when the frightening devices are used properly, birds can habituate to them very quickly if they are not accompanied by lethal control (remember lethal control requires a federal and likely state permit). More details on control are found below. You might get some ideas from how California jays are managed in pecan orchards.