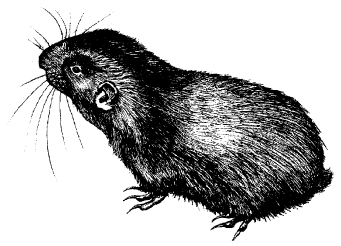 The mountain beaver (Aplodontia rufa, Fig. 1) is a medium-sized rodent in the family Aplodontiadae. There are no other species in the family. Average adults weigh 2.3 pounds (1,050 g) and range from 1.8 to 3.5 pounds (800 to 1,600 g). Average overall length is 13.5 inches (34 cm), including a rudimentary tail about 1 inch (2.5 cm) long. The body is stout and compact. The head is relatively large and wide and blends into a large neck with no depression where it joins the shoulders. The eyes and ears are relatively small and the cheeks have long silver “whiskers.” The hind feet are about 2 inches (5 cm) long and slightly longer than the front feet (Fig. 2). 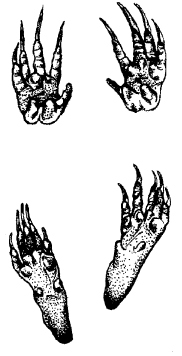 Figure 2. Mountain beaver feet are developed for burrowing and climbing.

Mountain beavers often balance on their hind feet while feeding. The front feet are developed for grasping and climbing.

Adults are grayish brown or reddish brown. The underfur on the back and sides is charcoal with brown tips; guard hair is dark brown or black with silver tips. Ventrally, the underfur is gray with few guard hairs. A whitish spot of bare skin is present at the base of the ears. The feet are lightly furred on top and bare on the soles. Young animals are generally darker than adults. Males have a baculum (a bone about 1 inch [2.5 cm] long in the penis). Mature females generally have a patch of dark-colored underfur around each of the six nipples.

Mountain beavers dig extensive individual burrow systems that generally are 1/2 to 6 feet (0.2 to 1.8 m) deep with 10 to 30 exit or entrance holes that are usually left open. The ground surface often caves in where burrows are shallow. There are many exit burrows forming T-shaped junctions with a main burrow. These exits may be horizontal or even vertical. Burrows are often found under old logs and are sometimes on the surface in logging debris. Mountain beavers seldom make obvious trails through vegetation. Most activity is at night and surface travel is usually near their burrows. Sometimes they are seen during daylight in dense surface vegetation several feet from burrow openings. Burrow systems usually cover a 1/4 acre (0.1 ha) or more and may intersect with burrow systems of adjacent individuals. Each system is apparently defended against neighboring mountain beavers. When an animal leaves a system or dies, the system is often quickly reoccupied by another mountain beaver. 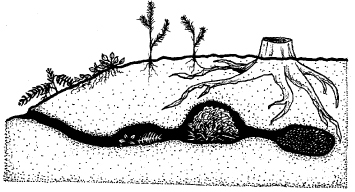 Each burrow system contains an underground dome-shaped chamber with a nest, usually about 3 feet (1 m) below ground level (Fig. 5). Nests may vary from 1 to 9 feet (0.3 to 3 m) deep and are entered by one or several entrances. Nest chambers are usually about 2 feet (0.6 m) in diameter and 1 to 2 feet (0.3 to 0.6 m) high. The dome is hardened by packing the soil, apparently with the front feet, causing the ceiling to become a hardened shell. Water entering from above travels along this shell to the edges or floor of the chamber. The floor is often covered with 1 to 2 inches (2 to 5 cm) of coarse sticks to facilitate drainage. On top of the sticks is a variety of dry vegetation that closely surrounds a sleeping mountain beaver. A nest may consist of several cubic feet of dry and nearly dry vegetation. The burrow system also includes smaller chambers or widened burrows used as food caches. A fecal chamber, usually present within a few yards (1 to 3 m) of the nest chamber, is packed with fecal pellets. Fecal deposit chambers may be larger than the nest chamber, representing many years’ use of the nest and burrow system.

In the spring and summer, mountain beavers periodically remove molded and partially eaten vegetation from their food caches. Most soil excavation occurs during dry periods from spring to fall. Vegetation is cut year-round, but activity outside burrows and away from the nest is curtailed during sub-freezing temperatures. Portions of a burrow may not be used daily, but active burrows in a burrow system are usually used at least weekly.
The habit of stacking cut vegetation at burrow openings has been considered a means to lower its moisture content before taking it into humid food caches or relatively dry nest chambers. Mountain beavers, however, do not always stack cut vegetation and often cut it during periods of continuous rainfall and high humidity. Occasionally there may be 20 or 30 fern fronds or several tree seedlings stacked at burrow openings. The animals usually are quick to carry away small bundles of sword fern that they have placed inside the burrow opening. Some items such as grasses and trailing blackberry vines are cut but are seldom stacked at openings.

Little is known about mountain beaver behavior during the breeding season. Breeding activity occurs mainly from January to March with gestation lasting about 30 days. Young are born blind and hairless, weighing about 3/4 ounce (20 g). They develop incisors at about 30 days and are weaned at about 8 weeks. Young animals are often active in May. Females apparently do not bear young until 2 years of age.

Territorial behavior usually limits mountain beaver population densities to about 4 per acre (10/ha) although densities may be higher in some areas. Densities are generally higher in May and June when young are still active within burrow systems. In winter, average population densities in large reforestation tracts (more than 100 acres [40 ha]) seldom exceed 2 animals per acre (5/ha).

Mountain beavers appear relatively free of diseases and internal parasites. Animals in western Washington were checked as possible carriers of plague but were found negative. A large flea (Hystrichopsylla schefferi) unique to mountain beavers is common on the animals but is not known to be a problem for humans. Mites (Acarina spp.) often infest the ear and eye region. 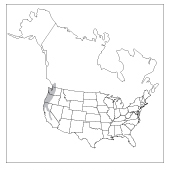 Mountain beavers are found in the Pacific coastal region from southern British Columbia to northern California (Fig. 3). They range westward from the Cascade Mountains and southward into the Sierras. Numbers are higher and populations are more continuous in the coastal Olympic Mountains and in the coast range of Washington and Oregon than elsewhere. In the southern limit of its range, populations are more scattered but sometimes locally abundant.

Mountain beaver habitat is characteristically dominated by coastal Douglas-fir (Pseudotsuga menziesii) and western hemlock (Tsuga heterophylla). Within this zone, mountain beavers often favor moist ravines and wooded or brushy hillsides or flats that are not subjected to continuous flooding. Although frequently found near small streams, they are not limited to those sites except in more arid regions. Active burrows may carry water run-off after heavy rains, but mountain beavers will vacate burrow systems that become flooded. Mountain beavers do not require free water; they obtain adequate moisture from the vegetation they eat.

Mountain beavers occupy mature forests usually in openings or in thinned stands where there is substantial vegetation in the understory. They usually leave stands where the canopy has closed and ground vegetation has become sparse. Preferred habitats in forested sites are often dominated by red alder (Alnus rubra), which the animals promote by preferentially feeding on conifers and other vegetation. These sites are often dominated by an understory of sword fern (Polystichum munitum), a preferred food of mountain beavers. Stands of bracken fern (Pteridium aquilinum) are also favored by mountain beavers. Preferred shrub habitats include salmonberry (Rubus spectabilis), huckleberry (Vaccinium parvifolium), salal (Gaultheria shallon), and Oregon grape (Berberis nervosa). Small trees often found cut by mountain beavers include vine maple (Acer circinatum) and cascara (Rhamnus purshiana). These species are often intermingled with 30 or more other plant species including forbs, grasses, and sedges.

The food habits of mountain beavers are closely tied to the dominant vegetation in their habitat. Sword fern and bracken fern are preferred when available. Douglas-fir, hemlock, western red cedar (Thuja plicata), and red alder are all commercial tree species that are cut and eaten by mountain beavers. Other species found in their habitat are either eaten or used for construction of nests. Most feeding occurs above ground within 50 feet (15.2 m) of burrows, although occasionally mountain beavers may travel several hundred feet from burrows. They routinely climb shrubs and trees 8 feet (2.4 m) or higher to cut off branches up to 3/4 inch (1.9 cm) in diameter, where they leave cut stubs of branches on trees. Mountain beavers also girdle the base of tree stems and will feed on stems up to 6 inches (15 cm) in diameter, as well as the root systems of large trees. The bark is found in the stomach contents of animals collected in midwinter. Woody stems are often girdled and cut into about 6-inch (15-cm) lengths. Food and/or nest items are often stacked at burrow entrances (Fig. 4) but are sometimes carried directly to food caches or nests. Plant material is occasionally eaten outside the burrow but is usually eaten at the food cache, in nests, or in the burrow. Mountain beavers practice coprophagy (consumption of feces) and select soft over hard pellets.

Figure 4. Sword fern and Douglas-fir piled at the entrance of a mountain beaver burrow.