The mountain lion (cougar, puma, catamount, panther; Fig. 1) is the largest cat native to North America. The head is relatively small, and the face is short and rounded. The neck and body are elongate and narrow. The legs are very muscular and the hind legs are considerably longer than the forelegs. The tail is long, cylindrical, and well-haired. The pelage of the mountain lion varies considerably. There are two major color phases — red and gray. The red phase varies from buff, cinnamon, and tawny to a very reddish color, while the gray phase varies from silvery gray to bluish and slate gray. The sides of the muzzle are black. The upper lip, chin, and throat are whitish. The tail is the same color as the body, except for the tip, which is dark brown or black. The young are yellowish brown with irregular rows of black spots. Male mountain lions are usually considerably larger than females. Adults range from 72 to 90 inches (183 to 229 cm) in total length including the tail, which is 30 to 36 inches (76 to 91 cm) long. They weigh from 80 to 200 pounds (36 to 91 kg). The mountain lion’s skull has 30 teeth. Female mountain lions have 8 mammae. 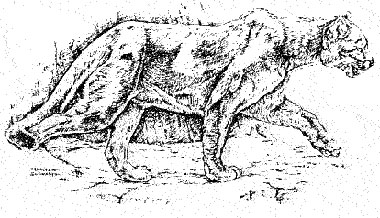 Mountain lions are shy, elusive, and primarily nocturnal animals that occasionally are active during daylight hours. For this reason they are seldom observed, which leads the general public to believe that they are relatively rare, even in areas where lion populations are high. They attain great running speeds for short distances and are agile tree climbers. Generally solitary, they defend territories. Dominant males commonly kill other males, females, and cubs. A mountain lion’s home range is usually 12 to 22 square miles (31 to 57 km2), although it may travel 75 to 100 miles (120 to 161 km) from its place of birth.

The mountain lion does not have a definite breeding season, and mating may take place at any time. In North America there are records of births in every month, although the majority of births occur in late winter and early spring. The female is in estrus for approximately 9 days. After a gestation period of 90 to 96 days, 1 to 5 young (usually 3 or 4) are born. The kittens can eat meat at 6 weeks although they usually nurse until about 3 months of age. The young usually hunt with their mother through their first winter.

Historically, the North American mountain lion population was drastically reduced by the encroachment of civilization and habitat destruction. Some populations in the West are growing rapidly. Local populations may fluctuate in response to changes in prey populations, particularly deer, their primary food source.

The mountain lion is usually hunted as a trophy animal with the aid of trail and sight hounds. Pelts are used for trophy mounts and rugs; claws and teeth are used for jewelry and novelty ornaments. The mountain lion is not an important species in the fur trade. In North America, it is primarily harvested in Arizona, New Mexico, Utah, Colorado, Idaho, western Montana, British Columbia, and Alberta.

Figure 2. Range of the mountain lion in North America.

The range of the mountain lion in North America is shown in figure 2. Its primary range occurs in western Canada and in the western and southwestern United States. Sparse populations occur in the south, from Texas to Florida. Several mountain lion sightings have occurred in Midwestern and eastern states but populations are not recognized.

Mountain lions are carnivorous. Their diet varies according to habitat, season, and geographical region. Although deer are their preferred prey and are a primary component of their diet, other prey will be taken when deer are unavailable. Other prey range from mice to moose, including rabbits, hares, beaver, porcupines, skunks, martens, coyotes, peccaries, bear cubs, pronghorn, Rocky Mountain goats, mountain sheep, elk, grouse, wild turkeys, fish, occasionally domestic livestock and pets, and even insects. Mountain lions, like bobcats and lynx, are sometimes cannibalistic.