Muskrats in some situations can be excluded or prevented from digging into farm pond dams through stone rip-rapping of the dam. Serious damage often can be prevented, if anticipated, by constructing dams to the following specifications: the inside face of the dam should be built at a 3-to-1 slope; the outer face of the dam at a 2-to-1 slope with a top width of not less than 8 feet (2.4 m), preferably 10 to 12 feet (3 to 3.6 m). The normal water level in the pond should be at least 3 feet (91 cm) below the top of the dam and the spillway should be wide enough that heavy rainfalls will not increase the level of the water for any length of time (Fig. 5).

These specifications are often referred to as over-building, but they will generally prevent serious damage from burrowing muskrats. Other methods of exclusion can include the use of fencing in certain situations where muskrats may be leaving a pond or lake to cut valuable garden plants or crops.

The best ways to modify habitat are to eliminate aquatic or other suitable foods eaten by muskrats, and where possible, to construct farm pond dams to previously suggested specifications. If farm pond dams or levees are being damaged, one of the ways that damage can be reduced is to draw the pond down at least 2 feet (61 cm) below normal levels during the winter. Then fill dens, burrows, and runs and rip-rap the dam with stone. Once the water is drawn down, trap or otherwise remove all muskrats.

Gunfire will frighten muskrats, especially those that get hit, but it is not effective in scaring the animals away from occupied habitat. No conventional frightening devices are effective.

No repellents currently are registered for muskrats, and none are known to be effective, practical, and environmentally safe.

The only toxicant federally registered for muskrat control is zinc phosphide as a 63% concentrate. It is a Restricted Use Pesticide for making baits. Zinc phosphide baits for muskrats generally are made by applying a vegetable oil sticker to cubes of apples, sweet potatoes, or carrots; sprinkling on the toxicant; and mixing thoroughly. The bait is then placed on floating platforms (Fig. 6), in burrow entrances, or on feeding houses. Use caution when mixing and applying baits treated with zinc phosphide. Carefully follow instructions on the zinc phosphide container before using.

Some states have obtained state registrations for use of anticoagulant baits such as pivalyl, warfarin, diphacinone, and chlorophacinone. These materials have proven effective, species selective, practical, and environmentally safe in field applications to control muskrats. Apparently there is not sufficient demand or research available to consider federal registration of anticoagulants for muskrats. These same first-generation anticoagulants are, however, federally registered for use in control of commensal rodents in and around buildings, and for some use in field situations for rodent control.

No fumigants are currently registered for muskrat control.

There have probably been more traps sold for catching muskrats than for catching any other furbearing species. A number of innovative traps have been constructed for both live trapping and killing muskrats, such as barrel, box, and stovepipe traps. 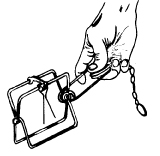 The most effective and commonly used types of traps for muskrats, however, are the Conibear®-type No. 110 (Fig. 7) and leghold types such as the long spring No. 1, 1 1/2, or 2 (Fig. 8) and comparable coil spring traps. Each type has places and situations where one might be more effective than another. The Conibear®-type , No. 110 is a preferred choice because it is as effective in 6 inches (15 cm) of water and at any deeper level. It kills the muskrat almost instantly, thus preventing escapes. All that is needed to make this set is a trap stake and trap.

Muskrats are probably the easiest aquatic furbearer to trap. In most cases where the run or burrow entrance is in 2 feet (61 cm) of water or more, even a leghold trap requires only a forked stake to make a drowning set. A trap set in the run, the house or den entrance, or even under a feeding house, will usually catch a muskrat in 1 or 2 nights. As a test of trap efficiency, this author once set 36 Conibear®-type No. 110 traps in a 100-acre (40-ha) rice field and 24 No. 1 1/2 leghold traps in a nearby 60-acre (24-ha) minnow pond on a July day. The next day 55 muskrats were removed. The remaining traps had not been tripped. Obviously, both of these areas held high populations of muskrats and neither had been subjected to recent control efforts. Results were 93.3% effectiveness with the Conibear®-type, 87.5% effectiveness with the leghold traps, and 100% catch per traps tripped.

Figure 9. Four sets for muskrats. Note: All traps are set under water. Chains are wired to anchors in deep water.

The most effective sets are those placed in “runs” or trails where the muskrat’s hind feet scour out a path into the bottom from repeated trips into and out of the den. These runs or trails can be seen in clear water, or can be felt underwater with hands or feet. Which runs are being used and which are alternate entrances can usually be discerned by the compaction of the bottom of the run. Place the trap as close to the den entrance as possible without restricting trap movement (Fig. 9).

Other productive sets are pole sets, under ice sets (Figs. 10 and 11), culvert sets. Other traps also can be used effectively in some situations. 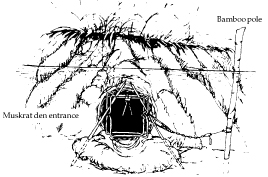 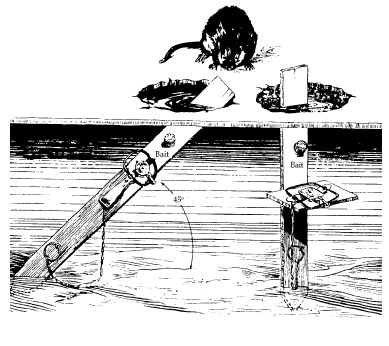 The stovepipe trap (Fig. 12) is very effective in farm ponds, rice fields, and marshes — where it is legal. This type of trap requires more time and effort to set, but can be very effective if the correct size is used. The trap is cheap, simple, and easy to make; however, to my knowledge, it is not available commercially. If properly set in a well-used den entrance, it will make multiple catches.

Figure 12. Stovepipe trap. Note: A length of 5-inch-diameter stove-pipe can be substituted for the side and bottom boards. In this case, the hinged doors must be made U-shaped.

The stovepipe trap has the potential to catch from two to four muskrats on the first night if set in the primary den entrance. The trap is cumbersome to carry around, however, and must be staked down properly and set right up against the den entrance to be most effective. The traps can be easily made from stovepipe, as the name implies, but some of the most effective versions are variations. An example is a sheet metal, 6 x 6-inch (15 x 15-cm) rectangular box, 30 to 36 inches (76 to 91 cm) long with heavy-gauge hardware cloth or welded-wire doors. The doors are hinged at the top to allow easy entry from either end, but no escape out of the box. Death from drowning occurs in a short time. The trap design also allows for multiple catches. Its flat bottom works well on most pond bottoms and in flooded fields or marshes, and it is easy to keep staked down in place. Such a trap can be made in most farm shops in a few minutes. All sets should be checked daily.

Trapping muskrats during the winter furbearer season can be an enjoyable past-time and even profitable where prices for pelts range from $2.00 to $8.00 each. Price differences depend on whether pelts are sold “in the round” or skinned and stretched. Many people supplement their income by trapping, and muskrats are one of the prime targets for most beginners learning to trap. Therefore, unless muskrats are causing serious damage, they should be managed like other wildlife species to provide a sustained annual yield. Unfortunately, when fur prices for muskrats are down to less than $2.00 each, interest in trapping for fur seems to decline. However, in damage situations, it may be feasible to supplement fur prices to keep populations in check.

Where it can be done safely, shooting may eliminate one or two individuals in a small farm pond. Concentrated efforts must be made at dusk and during the first hours of light in the early morning. Muskrats shot in the water rarely can be saved for the pelt and/or meat.

Although a variety of other methods are often employed in trying to control muskrat damage, a combination of trapping and proper use of toxicants is the most effective means in most situations. In situations where more extensive damage is occurring, it may be useful to employ an integrated pest management approach: (1) modify the habitat by removing available food (vegetation); (2) concentrate efforts to reduce the breeding population during winter months while muskrats are concentrated in overwintering habitat; and (3) use both registered toxicants and trapping in combination with the above methods.
There may be other effective methods beyond those already discussed. Some may not be species selective or environmentally safe. Before using any control methods for wildlife damage prevention or control, check existing regulations and use tools and methods that do not pose a danger to nontarget species.

Riprap the inside of a pond dam face with rock, or slightly overbuild the dam to certain specifications.

Draw down farm ponds during the winter months.

Body-gripping traps (Conibear® No. 110 and others).

Effective in eliminating some individuals.