The muskrat is the largest microtine rodent in the United States. It spends its life in aquatic habitats and is well adapted for swimming. Its large hind feet are partially webbed, stiff hairs align the toes (Fig. 2), and its laterally flattened tail is almost as long as its body. The muskrat has a stocky appearance, with small eyes and very short, rounded ears. Its front feet, which are much smaller than its hind feet, are adapted primarily for digging and feeding.

The name muskrat, common throughout the animal’s range, derives from the paired perineal musk glands found beneath the skin at the ventral base of the tail in both sexes. These musk glands are used during the breeding season. Musk is secreted on logs or other defecation areas, around houses, bank dens, and trails on the bank to mark the area.

The muskrat has an upper and a lower pair of large, unrooted incisor teeth that are continually sharpened against each other and are well designed for gnawing and cutting vegetation. It has a valvular mouth, which allows the lips to close behind the incisors and enables the muskrat to gnaw while submerged. With its tail used as a rudder and its partially webbed hind feet propelling it in the water, the muskrat can swim up to slightly faster than 3 miles per hour (4.8 kph). When feeding, the muskrat often swims backward to move to a more choice spot and can stay underwater for as long as 20 minutes. Muskrat activity is predominantly nocturnal and crespuscular, but occasional activity may be observed during the day.

Muskrats in the wild have been known to live as long as 4 years, although most do not reach this age. In good habitat and with little competition, muskrats are very prolific. With a gestation period of between 25 and 30 days, females in the southern part of the range commonly produce 5 to 6 litters per year.

Muskrats generally have a small home range but are rather territorial, and during breeding seasons some dispersals are common. The apparent intent of those leaving their range is to establish new breeding territories. Dispersal of males, along with young that are just reaching sexual maturity, seems to begin in the spring. Dispersal is also associated with population densities and population cycles. These population cycles vary from 5 years in some parts of North America to 10 years in others. Population levels can be impacted by food availability and accessibility.

Both male and female muskrats become more aggressive during the breeding season to defend their territories. Copulation usually takes place while submerged. The young generally are born between 25 and 30 days later in a house or bank den, where they are cared for chiefly by the female. In the southern states, some females may have as many as 6 litters per year. Litters may contain as many as 15, but generally average between 4 and 8 young. It has been reported that 2 to 3 litters per female per year is average in the Great Plains. This capability affords the potential for a prolific production of young. Young may be produced any month of the year. In Arkansas, the peak breeding periods are during November and March. Most of the young, however, are produced from October until April. Some are produced in the summer and early fall months, but not as many as in winter months. The period of highest productivity reported for the Great Plains is late April through early May. In the northern parts of its range, usually only 2 litters per year are produced between March and September.

Young muskrats are especially vulnerable to predation by owls, hawks, raccoons, mink, foxes, coyotes; and in the southern states, even largemouth bass and snapping turtles. The young are also occasionally killed by adult muskrats. Adult muskrats may also be subject to predation, but rarely in numbers that would significantly alter populations. Predation cannot be depended upon to solve damage problems caused by muskrats.

The range of the muskrat extends from near the Arctic Circle in the Yukon and the Northwest Territories, down to the Gulf of Mexico, and from the Aleutians east to Labrador and down the Atlantic coast into Georgia (Fig. 3). 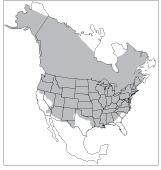 Figure 3. Range of the muskrat in North America.

The muskrat has been introduced practically all over the world, and, like most exotics, has sometimes caused severe damage as well as ecological problems. Muskrats often cause problems with ponds, levees, and crop culture, whether introduced or native. Muskrats are found in most aquatic habitats throughout the United States and Canada in streams, ponds, wetlands, swamps, drainage ditches, and lakes.

Muskrats can live almost any place where water and food are available year-round. This includes streams, ponds, lakes, marshes, canals, roadside ditches, swamps, beaver ponds, mine pits, and other wetland areas. In shallow water areas with plentiful vegetation, they use plant materials to construct houses, generally conical in shape (Fig. 4). 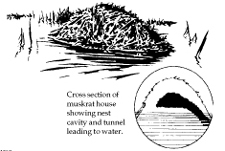 Elsewhere, they prefer bank dens, and in many habitats, they construct both bank dens and houses of vegetation. Both the houses of vegetation and the bank burrows or dens have several underwater entrances via “runs” or trails. Muskrats often have feeding houses, platforms, and chambers that are somewhat smaller than houses used for dens.

Burrowing activity is the source of the greatest damage caused by muskrats in much of the United States. They damage pond dams, floating styrofoam marinas, docks and boathouses, and lake shorelines. In states where rice and aquaculture operations are big business, muskrats can cause extensive economic losses. They damage rice culture by burrowing through or into levees as well as by eating substantial amounts of rice and cutting it down for building houses. In waterfowl marshes, population irruptions can cause “eat-out” where aquatic muskrat house vegetation in large areas is virtually eliminated by muskrats. In some locations, such as in the rice-growing areas of Arkansas, muskrats move from overwintering habitat in canals, drainage ditches, reservoirs, and streams to make their summer homes nearby in flooded rice fields. In aquaculture reservoirs, damage is primarily to levees or pond banks, caused by burrowing.

Muskrats are primarily herbivores. They will eat almost any aquatic vegetation as well as some field crops grown adjacent to suitable habitat. Some of the preferred natural foods include cattail, pickerelweed, bulrush, smartweed, duck potato, horsetail, water lily, sedges, young willow regeneration, and other aquatics. Crops that are occasionally damaged include corn, soybeans, wheat, oats, grain sorghum, and sugarcane. Rice grown as a flooded crop is a common muskrat food. It is not uncommon, however, to see muskrats subsisting primarily on upland vegetation such as bermuda grass, clover, johnson-grass, and orchard grass where planted or growing on or around farm pond dams.

Although primarily herbivores, muskrats will also feed on crayfish, mussels, turtles, frogs, and fish in ponds where vegetation is scarce. In some aquaculture industry areas, this feeding habit should be studied, as it may differ significantly from normal feeding activity and can cause economic loss.