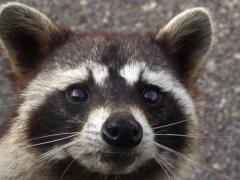 So what does it mean when a raccoon is seen during the day? Most people think that the raccoon must be rabid and become concerned about the safety of pets and children. Unfortunately, that belief is somewhat simplistic and may cause unnecessary fear.

First, we must remember that “normal” animal behavior is determined by averaging what most animals of that species do. But any specific animal may be “different” just like a family uncle might be a little “different” compared to the rest of the family.

Second, normal behavior requires a normal environment. The raccoon (Procyon lotor) you see running across your yard in broad daylight may have been evicted from its den a few houses down the street.

Third, urbanization, with its lights and activity, may also cause animals to change their behavior to adapt. Rats, for example, are typically nocturnal but will feed during daylight hours if there is less human activity at that time.

The period when an animal is active provides less information about its health than many people think. Nevertheless, an animal acting outside of its normal activity period should raise suspicion. Just remember that suspicion is not proof. A better way to determine whether an animal is sick is to evaluate its body movement and general appearance. Sick animals will tremble, walk or climb in a clumsy manner, wander in circles, and remain motionless for hours in an exposed location (note that this last sign does not apply to opossums which freeze when threatened). Sick animals will also exhibit an unkempt appearance. Fur will be missing, crusty, or matted. Pus may exude from the eyes and form a crust around the eyelids. Animals with the aforementioned characteristics should be removed by a qualified professional. Keep children and pets away from them as most bites occur when people approach the animal to “help it.