Kinds of Damage.
Nutria damage has been observed throughout their range. Most damage is from feeding or burrowing. In the United States, most damage occurs along the Gulf Coast of Louisiana and Texas. The numerous natural and human-made waterways that traverse this area are used extensively for travel by nutria.

Burrowing is the most commonly reported damage caused by nutria. Nutria are notorious in Louisiana and Texas for undermining and breaking through water-retaining levees in flooded fields used to produce rice and crawfish. Additionally, nutria burrows sometimes weaken flood control levees that protect low-lying areas. In some cases, tunneling in these levees is so extensive that water will flow unobstructed from one side to the other, necessitating their complete reconstruction.

Nutria sometimes burrow into the styrofoam flotation under boat docks and wharves, causing these structures to lean and sink. They may burrow under buildings, which may lead to uneven settling or failure of the foundations. Burrows can weaken roadbeds, stream banks, dams, and dikes, which may collapse when the soil is saturated by rain or high water, or when subjected to the weight of heavy objects on the surface (such as vehicles, farm machinery, or grazing livestock). Rain and wave action can wash out and enlarge collapsed burrows and compound the damage.

Nutria depredation on crops is well documented. In the United States, sugarcane and rice are the primary crops damaged by nutria. Grazing on rice plants can significantly reduce yields, and damage can be locally severe. Sugarcane stalks are often gnawed or cut during the growing season. Often only the basal internodes of cut plants are eaten. Other crops that have been damaged include corn, milo (grain sorghum), sugar and table beets, alfalfa, wheat, barley, oats, peanuts, various melons, and a variety of vegetables from home gardens and truck farms.

Nutria girdle fruit, nut, and shade trees and ornamental shrubs. They also dig up lawns and golf courses when feeding on the tender roots and shoots of sod grasses. Gnawing damage to wooden structures is common. Nutria also gnaw on styrofoam floats used to mark the location of traps in commercial crawfish ponds.

At high densities and under certain adverse environmental conditions, foraging nutria can significantly impact natural plant communities. In Louisiana, nutria often feed on seedling baldcypress and can cause the complete failure of planted or naturally-regenerated stands. Overutilization of emergent marsh plants can damage stands of desirable vegetation used by other wildlife species and aggravate coastal erosion problems by destroying vegetation that holds marsh soils together. Nutria are fond of grassy arrowhead (Sagittaria platyphylla) tubers and may destroy stands propagated as food for waterfowl in artificial impoundments.

Nutria can be infected with several pathogens and parasites that can be transmitted to humans, livestock, and pets. The role of nutria, however, in the spread of diseases such as equine encephalomyelitis, leptospirosis, hemorrhagic septicemia (Pasteurellosis), paratyphoid, and salmonellosis is not well documented. They may also host a number of parasites, including the nematodes and blood flukes that cause “swimmer’s-itch” or “nutria-itch” (Strongyloides myopotami and Schistosoma mansoni), the protozoan responsible for giardiasis (Giardia lamblia), tapeworms (Taenia spp.), and common liver flukes (Fasciola hepatica). The threat of disease may be an important consideration in some situations, such as when livestock drink from water contaminated by nutria feces and urine.

The ranges of nutria, beavers, and muskrats overlap in many areas and damage caused by each may be similar in appearance. Therefore, careful examination of sign left at the damage site is necessary to identify the responsible species.
Onsite observations of animals and their burrows are the best indicators of the presence of nutria. Crawl-outs, slides, trails, and the exposed entrances to burrows often have tracks that can be used to identify the species. The hind foot, which is about 5 inches (13 cm) long, has four webbed toes and a free outer toe. A drag mark left by the tail may be evident between the footprints (Fig. 3).
Droppings may be found floating in the water, along trails, or at feeding sites. These are dark green to almost black in color, cylindrical, and approximately 2 inches (5 cm) long and 1/2 inch (1.3 cm) in diameter. Additionally, each dropping usually has deep, parallel grooves along its entire length (Fig. 4).
Trees girdled by nutria often have no tooth marks, and bark may be peeled from the trunk. The crowns of seedling trees are usually clipped (similar to rabbit [Sylvilagus spp.] damage) and discarded along with other woody portions of the plant. 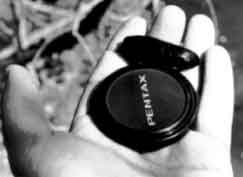 Figure 4. Nutria dropping in relation to a 2-inch (5.1-cm) camera lens cover. Note longitudinal grooves along the length of the dropping

In rice fields, damage caused by nutria, muskrats, and Norway rats (Rattus norvegicus) can be confused. Nutria and muskrats damage rice plants by clipping stems at the water line in flooded fields; Norway rats reportedly clip stems above the surface of the water (E. A. Wilson, personal communication).

Nutria are protected as furbearers in some states or localities because they are economically important. Permits may be necessary to control animals that are damaging property. In other areas, nutria have no legal protection and can be taken at any time by any legal means. Consequently, citizens experiencing problems with nutria should be familiar with local wildlife laws and regulations. Complex problems should be handled by professional wildlife damage control specialists who have the necessary permits and expertise to do the job correctly. Your state wildlife agency can provide the names of qualified wildlife damage control specialists and information on pertinent laws and regulations.

Economics of Damage and Control

Nutria can have either positive or negative values. They are economically important furbearers when their pelts provide income to commercial trappers. Conversely, they are considered pests when they damage property.
From 1977 to 1984, an average of 1.3 million nutria pelts were harvested annually in the United States. Based on prices paid to Louisiana trappers during this period, these pelts were worth about $7.3 million.
The estimated value of sugarcane and rice damaged by nutria each year has ranged from several thousand dollars to over a million dollars. If losses of other resources are added to this amount, the estimated average loss would probably exceed $1 million annually.

Management plans developed for nutria should be comprehensive and should consider the needs of all stakeholders. Regulated commercial trapping should be an integral part of any management scheme because it can provide continuous, long-term income to trappers; maintain acceptable nutria densities; and reduce damage to tolerable levels.

The value of the protected resource must be compared with the cost of control when determining whether nutria control is economically feasible. Most people will not control nutria if costs exceed the value of the resource being protected or if control will adversely impact income derived from trapping. Of course, there are exceptions, especially when the resource has a high sentimental or aesthetic value to the owner or user.