Prevent nuisance animals from entering structures by closing openings to cages and pens that house poultry. Opossums can be prevented from climbing over wire mesh fences by installing a tightly-stretched electric fence wire near the top of the fence 3 inches (8 cm) out from the mesh. Fasten garbage can lids with a rubber strap. 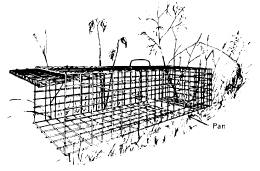 Opossums are not wary of traps and may be easily caught with suitable-sized box or cage traps (Fig. 4). No. 1 or 1 1/2 leghold traps also are effective. Set traps along fences or trail-ways. Dirt hole sets or cubby sets are effective (Fig. 5). 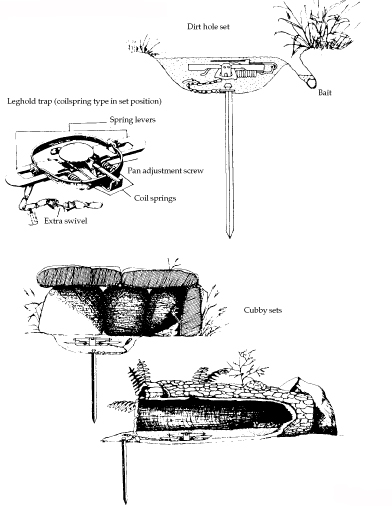 A dirt hole is about 3 inches (8 cm) in diameter and 8 inches (20 cm) deep. It extends into the earth at a 45-degree angle. The trap should be set at the entrance to the hole. A cubby is a small enclosure made of rocks, logs, or a box. The trap is set at the entrance to the cubby. The purpose of the dirt hole or cubby is to position the animal so that it will place its foot on the trap. Place bait such as cheese, or slightly spoiled meat, fish, or fruit in the dirt hole or cubby to attract the animal. Using fruit instead of meat will reduce the chance of catching cats, dogs, or skunks.

A medium-sized, body-gripping (kill type) trap will catch and kill opossums. Place bait behind the trap in such a way that the animal must pass through the trap to get it. Body-gripping traps kill the captured animal quickly. To reduce chances of catching pets, set the trap above ground on a running pole (Fig. 6).

A rifle of almost any caliber, or a shotgun loaded with No. 6 shot or larger, will effectively kill opossums. Use a light to look for opossums after dark. If an opossum has not been alarmed, it will usually pause in the light long enough to allow an easy shot. Once alarmed, opossums do not run rapidly. They will usually climb a nearby tree where they can be located with a light. Chase running opossums on foot or with a dog. If you lose track, run to the last place where you saw the animal. Stop and listen for the sound of claws on bark to locate the tree the animal is climbing.

Sometimes opossums can be approached quietly and killed by a strong blow with a club, but they can be surprisingly hard to kill in this manner. They can be taken alive by firmly grasping the end of the tail. If the animal begins to “climb its tail” to reach your hand, lower the animal until it touches the ground. This will distract the opossum and cause it to try to escape by crawling. Opossums can carry rabies, so wear heavy gloves and be wary of bites. Euthanize unwanted animals humanely with carbon dioxide gas, or release them several miles from the point of capture.

Practical where opossums are entering structures.

Remove cover and plug burrows to reduce frequency of visits by opossums.

Effective where firearms are permitted.