Preventing bear-people conflicts has been given considerable attention in the Canadian and Alaskan Arctic since the mid-1970s. Reducing the number of polar bear-people conflicts has increased the safety of people living and working in the Arctic and reduced the number of polar bears killed in problem situations. An active public information and education program will help inform people how to prevent bear problems. Most wildlife agencies in bear country have a variety of public education materials available that are specifically designed to help people prevent bear problems and better handle any that may occur. Special information and training workshops have been developed by the Department of Renewable Resources, Northwest Territories, and adopted by wildlife agencies and industry in other jurisdictions. The workshops instruct people on how to prevent bear conflicts. Two publications to assist workshop instructors are available. The Safety in Bear Country Manual (Bromley 1985, Graf et al. 1992) has been used as a reference text for most workshops.

Remove snow around buildings and work areas to increase visibility.
Install good lighting in areas where it is essential to detect bears that may be in the vicinity. Store garbage, human waste, food, and other products in areas not accessible to bears.

Vehicles, heavy construction equipment, snowmobiles, and helicopters can be used to chase polar bears away from work and living areas.

Constant vigilance of personnel working at the site.

Twelve-gauge shotgun and rifled slugs at close range.
High-powered rifle of .30-06 caliber or larger at close or long range.

Drugging and immobilization with Telazol (safest and most reliable drug) administered by a dart gun or jabstick. Other drugs can be used with suitable care.

Many bear problems occur at industry camps and work sites. When designing and setting up camps, the number of conflicts can be reduced by considering the potential bear problems. Keeping a clean camp and reducing the number of attractants will reduce bear problems. Once a bear has received a food or garbage reward from a camp, it will quickly associate the camp with available food. Most bears that are habituated to human food or garbage are destroyed in a problem bear situation. To reduce the number of problems and problem bear deaths, careful planning and precautions should be taken.

A “Problem Bear Site Operations Plan” was developed to help industrial operations better plan and prevent bear problems. The plan helps camp safety officers, team leaders, and managers locate and design facilities and programs that are site specific. It contains information and emergency contact telephone numbers, site design, personnel responsibilities, and techniques to detect and deter bears. The plan can be included in the Safety in Bear Country Manual as an additional chapter. Problem Bear Site Operation Plans have been developed for polar bear concerns at the arctic weather stations and for oil exploration activities in the Beaufort Sea. Each plan deals with being prepared for and preventing polar bear problems at specific sites.

Avoiding and responding to close encounters with polar bears is addressed by Bromley (1985), Fleck and Herrero (1988), Stirling (1988a), and Graf et al. (1992). While each polar bear encounter is different, the chance of a serious or fatal bear problem can be reduced by keeping alert and being informed and prepared to deal with any bear problems that may arise.

Electric fences have been tested on polar bears with limited success; grounding problems during winter months have been the primary obstacle. Davis and Rockwell (1986) describe an electric fence they used to protect a camp during the summer months along the Hudson Bay coast.

The use of high metal platforms, such as oil rig caissons, or offshore drilling ships, prevents bears from getting access to work and living areas. Sturdy metal buildings and iron bar cages have been successfully used to store food and equipment, and prevent polar bear access.

Non-lethal deterrents are used on polar bears in an attempt to scare them away rather than destroy them. Deterrents range from snowmobiles and vehicles to 12-gauge plastic slugs and cracker shells. Choosing an appropriate deterrent will depend on the type of problem and specific location (Table 1). Regardless of the type of deterrent used, all encounters with bears should be supported by an additional person equipped with a loaded firearm.

Graf et al. (1992) reviewed several deterrents that are useful for polar bears. Clarkson (1989) recommends the use of a 12-gauge shotgun and a “three-slug system” (cracker shell, plastic slug, and lead slug). Deter bears from a site as soon as they are seen in the area, to prevent them from approaching closer and receiving some type of food or garbage reward. Figure 3 identifies the appropriate distances for deterring versus destroying a bear. Each bear deterrent situation is different, and depends on the bear’s behavior and safety options available at the site. When deterring a bear with a plastic slug, aim for the large muscle mass area in the hind quarters (Fig. 4). The neck and front shoulders should be avoided to minimize the risk of hitting and damaging an eye. 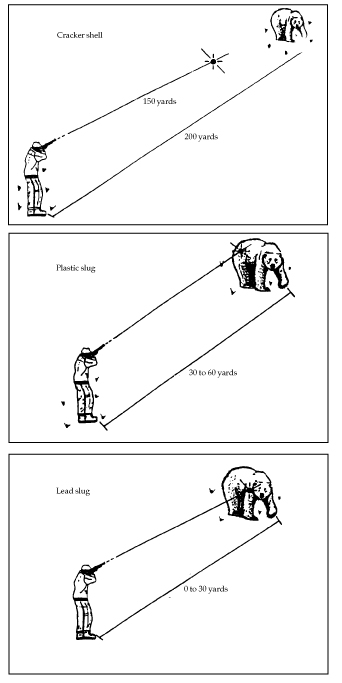 Figure 3. Deterring and destroying a bear with a 12-gauge shotgun

Detecting a polar bear that is approaching a work or living area is an important part of handling bear problems. Bear detection systems range from a simple tripwire to more technical electronic monitoring devices (Table 2). If a bear is approaching a work or living area, the personnel on site should have time first to ensure their safety and second to prepare to deter the bear. Detection systems must be properly installed and maintained to be effective. If bear problems are rare, a system that is too technical or difficult to maintain will soon be neglected. Bear monitors and dogs should have previous experience with bears. An experienced bear dog can act both as a detection and deterrent system.

Capsaicin (oleoresin of capsicum or concentrated red pepper) spray has been tested and used on black and grizzly bears (Hunt 1984), but has not yet been tested on polar bears. It may become more popular where restrictions on firearms are in place. Capsaicin needs to be scientifically tested before it can be formally recommended for polar bear protection.

No toxicants are registered for use on polar bears.

No fumigants are registered for use on polar bears.

Live traps used to capture polar bears include culvert or barrel traps and foot snares. Both have been used to capture all three bear species in North America. The culvert trap has been used to capture polar bears at Churchill, Manitoba, and in the eastern Northwest Territories. It can also be used for short-term holding and transporting of captured polar bears. Foot snares were used in polar bear research in the early 1970s and are useful in some situations today. A detailed description of using the culvert trap and foot snare is found in the Black Bears chapter in this handbook. In the early to mid-1900s, large leg hold traps were used along the Arctic coast. These are no longer used today.

Unfortunately, some bear-people conflicts require that problem bears be shot. Polar bears can be aggressive in attempting to obtain food, especially if they are in poor condition and near starving. If it is necessary to destroy a polar bear, it should be done as efficiently and humanely as possible. The 12-gauge pump action shotgun with lead slugs is an effective weapon for destroying a bear at close range (less than 100 feet [30 m]). It can also be used to deter a polar bear. High-powered rifles of .30-06 or larger caliber are also effective in destroying bears. A rifle used for bear protection should be equipped with open sights for close-range use. 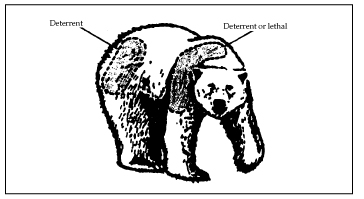 Generally, if a bear is beyond 150 feet (45 m), destroying it is not necessary because the bear can be deterred before it comes closer. If it is necessary to destroy a bear beyond 100 feet (30 m), a high-powered rifle will be more accurate and have more penetration energy. Whether a shotgun or rifle is used, bears should be shot in the chest/vital organ area (Fig. 4). Handguns are not recommended for bear protection or for destroying problem bears. Proper training and practice is necessary to effectively use a firearm for bear protection or for destroying a bear.

Drugging/Immobilization. Polar bears are often immobilized in problem situations. Bears can be drugged while free ranging by darting them from the ground or from a helicopter, or darting after capture in a culvert trap or foot snare. Darts can be fired from a rifle or pistol. A jab stick can be used to immobilize bears captured in a culvert trap, but is not recommended for bears in a foot snare.

Darting from a helicopter (Bell 206 Jet Ranger or similar size), has been used for research and problem bear management. The helicopter should be equipped with a shooting window and have sling capabilities for moving bears. The helicopter should slowly approach the bear from behind at an altitude of 20 to 30 feet (6 to 10 m). Shooting distance from a helicopter is usually less than 30 feet (10 m). Bears should be darted in the large muscle areas of the neck, shoulder, or upper midback. Several immobilizing drugs have been used on polar bears in the past, however, Telazol is presently considered the most effective. Telazol is a safe and predictable drug to work with because there is a wide range of tolerance to high dosages, the reactions of darted bears can be easily interpreted, and the bears are able to thermoregulation while immobilized. Dosages of 8 to 9 mg/kg or greater are usually necessary to fully immobilize a polar bear for measuring and tagging. Immobilization time for adult bears depends on the injection site and weight of the bear. On the average, a bear will be immobilized in 4 to 5 minutes after the first injection of Telazol. Cubs of the year can be immobilized by hand or with a jabstick after being captured on or near their immobilized mother.

Holding, Transporting, and Relocating. Problem polar bears that are captured or immobilized and not destroyed are usually held in a culvert trap or other suitable facility. Bears can be transported from a problem site with a culvert trap and released at another location if a road system exists. Road systems are limited in the arctic and relocating problem bears with culvert traps is usually not an effective option. In most cases, captured and immobilized bears need to be relocated by helicopter. Take precautions to ensure that bears are not injured or suffering from hyperthermia when transporting them in a cargo net below a helicopter.

In Churchill, Manitoba, polar bears are captured in or near the town limits, held in a polar bear holding facility and then flown out to an area north of Churchill and released. Capturing and holding the bears in the “polar bear jail” prevents these bears from causing problems while they are waiting for the ice to form on Hudson Bay. Bears kept in a holding facility can be given water, but food is not recommended because the bears may begin to associate people and the holding facility with food. Although an expensive program, the polar bear jail at Churchill has reduced the number of polar bear problems and polar bear mortalities.

Relocating problem bears usually does not solve the problem since they often return, sometimes from considerable distances. Polar bears that are waiting along a coastline for ice to form should be moved in the general direction they would normally travel. Most of the polar bears released north of Churchill travel out on the sea ice and do not return to the town site.