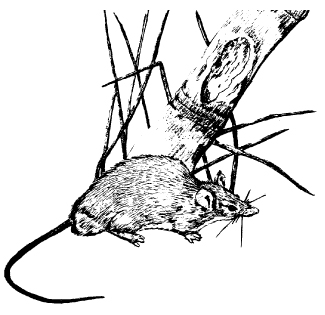 The Polynesian ratis smaller than either the Norway rat (R. norvegicus) or the roof rat (R. rattus). Polynesian rats have slender bodies, pointed snouts, large ears, and relatively small, delicate feet. A ruddy brown back contrasts with a whitish belly. Mature individuals are 4.5 to 6 inches long (11.5 to 15.0 cm) from the tip of the nose to the base of the tail and weigh 1.5 to 3 ounces (40 to 80 g). The tail has prominent fine scaly rings and is about the same length as the head and body. Female Polynesian rats have 8 nipples, compared to 10 and 12 nipples normally found on roof rats and Norway rats, respectively.

Reproduction varies among geographic areas and is influenced by weather, availability of food, and other factors. Reproductive activity of Polynesian rats on Oahu reaches a peak in late summer and ceases in mid to late winter. Polynesian rats on Kure Atoll in northwestern Hawaii produce most litters from May through August. On the windward side of the island of Hawaii, Polynesian rats breed throughout the year, with peak reproduction occurring in the summer and early fall. Females have an average of 4 litters per year, with a range of 3 to 6 and an average of 4 young per litter. The minimum gestation period for captive rats is 23 days, with lactation prolonging gestation by 3 to 7 days. In captivity, newborns open their eyes about 2 weeks after birth and are weaned when about 3 weeks old. Captive-bred individuals reach reproductive maturity when they are 60 to 70 days old and weigh about 1.5 ounces (40 g). The life expectancy of wild rats is less than 1 year.

Hawaii is one of the few areas in the world where sugarcane is grown as a 2-to 3-year crop. Most rats living in cane fields either die or migrate to surrounding areas during harvest, and populations do not rebuild until the second half of the crop cycle. During much of the first year, the sugarcane stalks stand erect, the crop canopy is open, and most fields have little ground cover. Some rats from adjacent waste areas forage along the periphery of young sugarcane fields, but few venture into the interior until the sugarcane is 8 to 12 months of age. At this time the sugarcane stalks fall over and dead leaves accumulate. The resulting thatch layer is rich in invertebrate food and provides protective cover in fields where rats establish dens.

Movements and home ranges in sugar cane fields vary depending on population density, crop age, and other factors. Polynesian rats are nocturnal and are relatively sedentary. Males travel farther than females, but the home ranges of both sexes decrease as the sugarcane matures. Individuals typically stray less than 100 to 165 feet (30 to 50 m) from their burrows.

Population Changes
Roof rats, Norway rats, and Polynesian rats coexist throughout much of the Pacific basin. It is not known how much, if any, inter-specific competition exists. After the arrival of Norway rats, roof rats, and house mice (Mus musculus) in New Zealand, populations of Polynesian rats declined. Today, they are very rare on the two main islands. It is not clear whether a similar decline occurred in Hawaii, but if so, Polynesian rats have adjusted. Today, they are the most abundant lowland rat in many parts of the state.

In Hawaii, roof rats, Norway rats, and Polynesian rats often occur in the same sugarcane fields. Only the latter two are major pests in sugarcane, with roof rats occurring mostly near field edges. Since the late 1960s Norway rats have increased their abundance relative to the other two species in Hawaiian sugarcane fields and are now the species of primary concern to the Hawaiian sugarcane industry. Polynesian rats, however, are still locally abundant in many fields.

Polynesian rats are native to Southeast Asia but have dispersed with humans across the central and western Pacific. Today, these rodents inhabit almost every Pacific island within 30o of the equator. They occur from the Asiatic mainland south to New Guinea and New Zealand, and east to the Hawaiian Islands and Easter Island. Polynesian rats accompanied early Polynesian immigrants to Hawaii and today occur on every major island of the archipelago. The Polynesian rat is not present in the mainland United States.

In Hawaii, Polynesian rats are most common below 2,500 feet (750 m) elevation, although individuals have been captured at an elevation of 4,900 feet (1,500 m) on Mauna Loa on the island of Hawaii and 9,700 feet (2,950 m) on the rim of Haleakala Crater on Maui. Polynesian rats prefer areas with good ground cover on well-drained soil. Throughout much of their range, Polynesian rats live in close association with humans. In Hawaii, however, Polynesian rats are not a commensal pest, but rather favor wild lowland habitats such as wooded and grassy gulches, fields, and waste areas. They reach their highest densities on agricultural lands such as sugarcane fields and abandoned pineapple fields.

Polynesian rats eat a wide variety of foods, including broadleaf plants, grasses, fruits, seeds, and animal matter. They prefer fleshy fruits such as melastoma (Melastoma malabathricum), passion fruit (Passiflora spp.), guava (Psidium spp.), thimbleberry (Rubus rosaefolius), and popolo (Solanum nodiflorum). In sugarcane fields, sugarcane comprises about 70% of their diet by volume, while in surrounding non-crop gulches, it comprises about 20% to 50%. Rats cannot subsist on sugarcane alone. They need additional protein, such as earthworms, spiders, amphipods, insects, and eggs and young of groundnesting birds.