Clipped twigs on fresh snow, tracks, and gnawings on trees are useful means of damage identification (Fig. 3). Trees are often deformed from partial girdling. Porcupines clip twigs and branches that fall to the ground or onto snow and often provide food for deer and other mammals. The considerable secondary effects of their feeding come from exposing the tree sapwood to attack by disease, insects, and birds. This exposure is important to many species of wildlife because diseased or hollow trees provide shelter and nest sites. 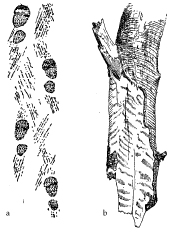 Porcupines occasionally will cause considerable losses by damaging fruits, sweet corn, alfalfa, and small grains. They chew on hand tools, decks, and other wood objects while seeking salt. They destroy siding on cabins when seeking plywood resins.

Porcupines offer a considerable threat to dogs, which never seem to learn to avoid them. Domestic stock occasionally will nuzzle a porcupine and may be fatally injured if quills are not removed promptly.

Porcupines are considered nongame animals and are not protected.

Economics of Damage and Control

Economic losses can be considerable from porcupines feeding on forest plantings, ornamentals, and orchards as well as on leather and other human implements. Porcupines generally are tolerated except when commercial timber, high-value ornamental plantings, orchards, or nursery plants are damaged by girdling, basal gnawing, or branch clipping. On occasion, porcupines thin dense, crowded forest stands. Often tree diameter growth is reduced. Their preference for mistletoe as a food is an asset.

The porcupine is acclaimed as a beautiful creature of nature. It is an interesting animal that has an important place in the environment. It is edible and has been used by humans as an emergency food. The quills are used for decorations, especially by Native Americans. The hair, currently used for flyfishing lures, commands many dollars per ounce. Porcupines are not wary and can be readily observed and photographed by nature lovers. Porcupines may need to be controlled but should not be totally eradicated.