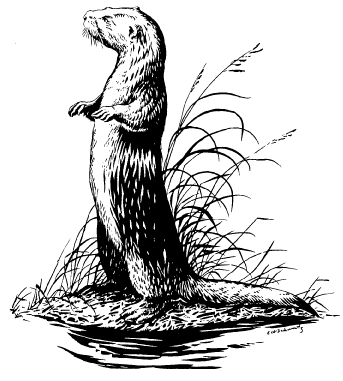 River otters (Lutra canadensis, Fig. 1) are best known for their continuous and playful behavior, their aesthetic value, and the value of their durable, high-quality fur. They have long, streamlined bodies, short legs, and a robust, tapered tail, all of which are well adapted to their mostly aquatic habitat. They have prominent whiskers just behind and below the nose, thick muscular necks and shoulders, and feet that are webbed between the toes. Their short but thick, soft fur is brown to almost black except on the chin, throat, cheeks, chest, and occasionally the belly, where it is usually lighter, varying from brown to almost beige.

Adult males usually attain lengths of nearly 48 inches (122 cm) and weights of about 25 pounds (11.3 kg), but may reach 54 inches (137 cm) and 33 pounds (15 kg). Their sex can be readily distinguished by the presence of a baculum (penile bone). Females have 4 mammae on the upper chest and are slightly smaller than males. Female adults measure about 44 inches (112 cm) and weigh 19 pounds (8.6 kg). The mean weights and sizes of river otters in southern latitudes tend to be lower than those in latitudes farther north.

The reproductive biology of river otters and all other weasels is complex because of a characteristic known as delayed implantation. Following breeding and fertilization in spring, eggs (blastocysts) exist in a free-floating state until the following winter or early spring. Once they implant, fetal growth lasts 60 to 65 days until the kits are born, usually in spring (March through May) in most areas. In the southern portion of the range the dates of birth occur earlier, mostly in January and February, implying implantation in November and December. Litters usually contain 2 to 4 kits, and the female alone cares for the young. They usually remain together as a family group though the fall and into the winter months. Sexual maturity in young is believed to occur at about 2 years of age in females, but later in males.

River otters are chiefly nocturnal, but they frequently are active during day-light hours in undisturbed areas. Socially, the basic group is the female and her offspring. They spend much of their time feeding and at what appears to be group play, repeatedly sliding down steep banks of mud or snow. They habitually use specific sites (toilets) for defecation. Their vocalizations include chirps, grunts, and loud piercing screams. They are powerful swimmers and are continuously active, alert, and quick—characteristics that give them immense aesthetic and recreational value. Their webbed feet, streamlined bodies, and long, tapered tails enable them to move through water with agility, grace, and speed. Seasonally, they may travel distances of 50 to 60 miles (80 to 96 km) along streams or lake shores, and their home ranges may be as large as 60 square miles (155 km2). Males have been recorded to travel up to 10 miles (16 km) in 1 night.

River otters use a variety of denning sites that seem to be selected based on availability and convenience. Hollow logs, rock crevices, nutria houses, and abandoned beaver lodges and bank dens are used. They will also frequent unused or abandoned human structures or shelters. Natal dens tend to be located on small headwater branches or streams leading to major drainages or lakes.

Figure 2. Distribution of the river otter in North America.

River otters occur throughout North America except the arctic slopes, the arid portions of the Southwest, and the intensive agricultural and industrialized areas of the Midwestern United States (Fig. 2). Their precolonial range apparently included all of North America except the arid Southwest and the northernmost portions of Alaska and Canada. Otter populations are confined to water courses, lakes, and wetlands, and therefore, population densities are lower than those of terrestrial species. Their extirpation from many areas is believed to have been related more to poisoning by pesticides bio-magnified in fishes, and to the indirect adverse effects of water pollution on fish, their main food, than to excessive harvest. The loss of ponds and other wetland habitat that resulted from the extirpation of beaver in the late 1800s may have adversely affected continental populations of river otters more than any other factor. Increases in the range and numbers of river otters in response to the return of beaver has been dramatic, particularly in the southeastern United States. Recent releases totaling more than 1,000 otters have been made in Arizona, Colorado, Iowa, Kansas, Kentucky, Missouri, Nebraska, Oklahoma, Pennsylvania, Tennessee, and West Virginia in efforts to reestablish local populations.
River otters are almost invariably associated with water (fresh, brackish, and salt water), although they may travel overland for considerable distances. They inhabit lakes, rivers, streams, bays, estuaries, and associated riparian habitats. They occur at much higher densities in regions of the Great Lakes, in brackish marshes and inlets, and in other coastal habitats than farther inland. In colder climates, otters frequent rapids and waterfall areas that remain ice-free. Vegetative cover and altitude do not appear to influence the river otter’s distribution as much as do good or adequate water quality, the availability of forage fish, and suitable denning sites.

The diet of the river otter throughout its range is primarily fish. Numerous species and varieties of fresh and anadromous fishes are eaten, but shell-fish, crayfish, amphibians, and reptiles are also frequently eaten, as are several species of crabs in coastal marshes. Mammals and birds are rarely eaten. Consumption of game fishes in comparison to nongame (rough) fishes is generally in proportion to the difficulty, or ease, with which they can be caught. Because of the availability of abundant alternate food species in warm water, losses of the warm water sport fishes are believed minor compared to losses river otters can inflict on cold water species such as trout and salmon.