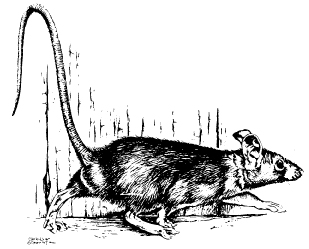 The roof rat is one of two introduced rats found in the contiguous 48 states. The Norway rat (R. norvegicus) is the other species and is better known because of its widespread distribution. A third rat species, the Polynesian rat (R. exulans) is present in the Hawaiian Islands but not on the mainland. Rattus rattus is commonly known as the roof rat, black rat, and ship rat. Roof rats were common on early sailing ships and apparently arrived in North America by that route. This rat has a long history as a carrier of plague.

Three subspecies have been named, and these are generally identified by their fur color: (1) the black rat (R. rattus rattus Linnaeus) is black with a gray belly; (2) the Alexandrine rat (R. rattus alexandrinus Geoffroy) has an agouti (brownish streaked with gray) back and gray belly; and (3) the fruit rat (R. rattus frugivorus Rafinesque), has an agouti back and white belly. The reliability of using coloration to identify the subspecies is questionable, and little significance can be attributed to subspecies differentiations. In some areas the subspecies are not distinct because more than one subspecies has probably been introduced and cross-breeding among them is a common occurrence. Roof rats cannot, however, cross with Norway rats or any native rodent species.

Some of the key differences between roof and Norway rats are given in Table 1. An illustration of differences is provided in figure 2 of the chapter on Norway rats.

Control methods must reflect an understanding of the roof rat’s habitat requirements, reproductive capabilities, food habits, life history, behavior, senses, movements, and the dynamics of its population structure. Without this knowledge, both time and money are wasted, and the chances of failure are increased.

The young are born in a nest about 21 to 23 days after conception. At birth they are hairless, and their eyes are closed. The 5 to 8 young in the litter develop rapidly, growing hair within a week. Between 9 and 14 days, their eyes open, and they begin to explore for food and move about near their nest. In the third week they begin to take solid food. The number of litters depends on the area and varies with nearness to the limit of their climatic range, availability of nutritious food, density of the local rat population, and the age of the rat. Typically, 3 or more litters are produced annually.

The young may continue to nurse until 4 or 5 weeks old. By this time they have learned what is good to eat by experimenting with potential food items and by imitating their mother.

Young rats generally cannot be trapped until about 1 month old. At about 3 months of age they are completely independent of the mother and are reproductively mature.

Breeding seasons vary in different areas. In tropical or semitropical regions, the season may be nearly year-round. Usually the peaks in breeding occur in the spring and fall. Roof rats prefer to nest in locations off of the ground and rarely dig burrows for living quarters if off-the-ground sites exist.

The food habits of roof rats outdoors in some respects resemble those of tree squirrels, since they prefer a wide variety of fruit and nuts. They also feed on a variety of vegetative parts of ornamental and native plant materials. Like Norway rats, they are omnivorous and, if necessary, will feed on almost anything. In food-processing and storage facilities, they will feed on nearly all food items, though their food preferences may differ from those of Norway rats. They do very well on feed provided for domestic animals such as swine, dairy cows, and chickens, as well as on dog and cat food. There is often a correlation between rat problems and the keeping of dogs, especially where dogs are fed outdoors. Roof rats usually require water daily, though their local diet may provide an adequate amount if it is high in water content.

Rats usually begin searching for food shortly after sunset. If the food is in an exposed area and too large to be eaten quickly, but not too large to be moved, they will usually carry it to a hiding place before eating it. Many rats may cache or hoard considerable amounts of solid food, which they eat later. Such caches may be found in a dismantled wood pile, attic, or behind boxes in a garage.

When necessary, roof rats will travel considerable distances (100 to 300 feet [30 to 90 m]) for food. They may live in the landscaping of one residence and feed at another. They can often be seen at night running along overhead utility lines or fences. They may live in trees, such as palm, or in attics, and climb down to a food source. Traditional baiting or trapping on the ground or floor may intercept very few roof rats unless bait and/or traps are placed at the very points that rats traverse from above to a food resource. Roof rats have a strong tendency to avoid new objects in their environment and this neophobia can influence control efforts, for it may take several days before they will approach a bait station or trap. Neophobia is more pronounced in roof rats than in Norway rats. Some roof rat populations are skittish and will modify their travel routes and feeding locations if severely and frequently disturbed. Disturbances such as habitat modifications should be avoided until the population is under control.

Rat densities (numbers of rats in a given area) are determined primarily by the suitability of the habitat—the amount of available nutritional and palatable food and nearby protective cover (shelter or harborage).
The great adaptability of rats to human-created environments and the high fertility rate of rats make for quick recuperation of their populations. A control operation, therefore, must reduce numbers to a very low level; otherwise, rats will not only reproduce rapidly, but often quickly exceed their former density for a short period of time.

Unless the suitability of the rat’s habitat is destroyed by modifying the landscaping, improving sanitation, and rat-proofing, control methods must be unrelenting if they are to be effective.

Figure 2. Approximate distribution of roof rats (a) and Norway rats (b) in the United States.

Roof rats range along the lower half of the East Coast and throughout the Gulf States upward into Arkansas. They also exist all along the Pacific Coast and are found on the Hawaiian Islands (Fig. 2). The roof rat is more at home in warm climates, and apparently less adaptable, than the Norway rat, which is why it has not spread throughout the country. Its worldwide geographic distribution suggests that it is much more suited to tropical and semitropical climates. In rare instances, isolated populations are found in areas not within their normal distribution range in the United States. Most of the states in the US interior are free of roof rats, but isolated infestations, probably stemming from infested cargo shipments, can occur.

Roof rats are more aerial than Norway rats in their habitat selection and often live in trees or on vine-covered fences. Landscaped residential or industrial areas provide good habitat, as does riparian vegetation of riverbanks and streams. Parks with natural and artificial ponds, or reservoirs may also be infested. Roof rats will often move into sugarcane and citrus groves. They are sometimes found living in rice fields or around poultry or other farm buildings as well as in industrial sites where food and shelter are available.

Roof rats frequently enter buildings from the roof or from accesses near overhead utility lines, which they use to travel from area to area. They are often found living on the second floor of a warehouse in which Norway rats occupy the first or basement floor. Once established, they readily breed and thrive within buildings, just as Norway rats do. They have also been found living in sewer systems, but this is not common.

Rats rely more on their keen senses of smell, taste, touch, and hearing than on vision. They are considered to be color-blind, responding only to the degree of lightness and darkness of color.

They use their keen sense of smell to locate and select food items, identify territories and travel routes, and recognize other rats, especially those of the opposite sex. Taste perception of rats is good; once rats locate food, the taste will determine their food preferences.

Touch is an important sense in rats. The long, sensitive whiskers (vibrissae) near their nose and the guard hairs on their body are used as tactile sensors. The whiskers and guard hairs enable the animals to travel adjacent to walls in the dark and in burrows.

Roof rats also have an excellent sense of balance. They use their tails for balance while traveling along overhead utility lines. They move faster than Norway rats and are very agile climbers, which enables them to quickly escape predators. Their keen sense of hearing also aids in their ability to detect and escape danger.

The social behavior of free-living roof rats is very difficult to study and, as a result, has received less attention than that of Norway rats. Most information on this subject comes from populations confined in cages or outdoor pens.

Knowledge is limited on interspecific competition between the different genera and species of rats. At least in some parts of the United States and elsewhere in the world, the methods used to control rats have reduced Norway rat populations but have permitted roof rats to become more prominent, apparently because they are more difficult to control. Elsewhere, reports indicate that roof rats are slowly disappearing from localized areas for no apparent reason.

It has often been said that Norway rats will displace roof rats whenever they come together, but the evidence is not altogether convincing.