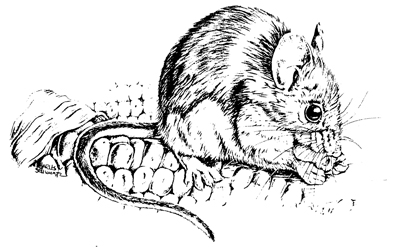 All of the Peromyscus species have white feet, usually white undersides, and brownish upper surfaces. Their tails are relatively long, sometimes as long as the head and body. The deer mouse and some other species have a distinct separation between the brownish back and white belly. Their tails are also sharply bicolored. It is difficult even for an expert to tell all of the species apart.

In comparison to house mice, white-footed and deer mice have larger eyes and ears. They are considered by most people to be more “attractive” than house mice, and they do not have the characteristic mousy odor of house mice. All species of Peromyscus cause similar problems and require similar solutions.

In warm regions, reproduction may occur more or less year-round in some species. More typically, breeding occurs from spring until fall with a summer lull. This is especially true in cooler climates. Litter size varies from 1 to 8 young, but is usually 3 to 5. Females may have from 2 to 4 or more litters per year, depending on species and climate.

During the breeding season, female white-footed and deer mice come into heat every fifth day until impregnated. The gestation period is usually 21 to 23 days, but may be as long as 37 days in nursing females. Young are weaned when they are 2 to 3 weeks old and become sexually mature at about 7 to 8 weeks of age. Those born in spring and summer may breed that same year.
Mated pairs usually remain together during the breeding season but may take new mates in the spring if both survive the winter. If one mate dies, a new one is acquired. Family groups usually nest together through the winter. They do not hibernate but may become torpid for a few days when winter weather is severe. 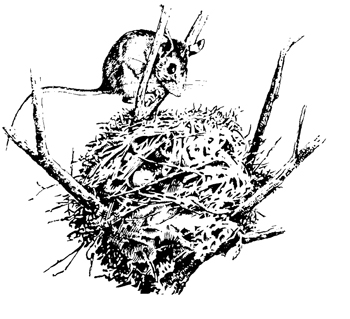 Nests consist of stems, twigs, leaves, roots of grasses, and other fibrous
materials. They may be lined with fur, feathers, or shredded cloth. The deer
mouse often builds its nest underground in cavities beneath the roots of
trees or shrubs, beneath a log or board, or in a burrow made by another
rodent. Sometimes deer mice nest in aboveground sites such as a hollow log
or fencepost, or in cupboards and furniture of unoccupied buildings.

White-footed mice spend a great deal of time in trees. They may use abandoned bird or squirrel nests, adding a protective “roof” of twigs and other materials to completely enclose a bird’s nest (Fig. 3). Like deer mice,
they nest at or just below ground level or in buildings. 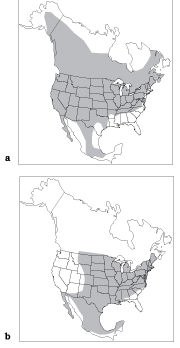 Figure 2. Range of the deer mouse (P. maniculatus) (a) and white-footed mouse (P. leucopus) (b) in North America.

The piñon mouse is found from southwestern California through the southwestern United States to the Texas panhandle. The rock mouse is limited to Colorado, southeastern Utah, eastern Arizona, New Mexico, and the far western portion of Texas. The white-ankled mouse is found only in parts of Texas and small areas in southern New Mexico, southern Oklahoma, and southern Arizona. The Merriam mouse is limited to areas within southern Arizona. The California mouse ranges from San Francisco Bay to northern Baja California, including parts of the southern San Joaquin Valley. The Sitka mouse is found only on certain islands of Alaska and British Columbia. The oldfield mouse is distributed across eastern Alabama, Georgia, South Carolina, and Florida. The Florida mouse, as its name indicates, is found only in Florida.

The deer mouse occupies nearly every type of habitat within its range, from forests to grasslands. It is the most widely distributed and abundant mammal in North America. The white-footed mouse is also widely distributed but prefers wooded or brushy areas. It is sometimes found in open areas.
The other species of Peromyscus have somewhat more specialized habitat preferences. For example, the cactus mouse occurs in low deserts with sandy soil and scattered vegetation and on rocky outcrops. The brush mouse lives in chaparral areas of semi-desert regions, often in rocky habitats.

White-footed and deer mice are primarily seed eaters. Frequently they will feed on seeds, nuts, acorns, and other similar items that are available. They also consume fruits, insects and insect larvae, fungi, and possibly some green vegetation. They often store quantities of food near their nest sites, particularly in the fall when seeds, nuts, or acorns are abundant.