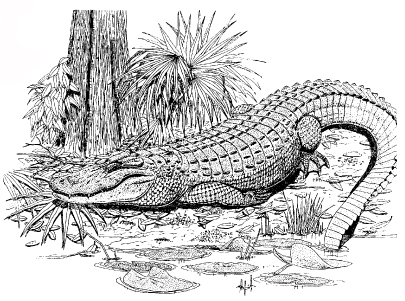 Alligators are ectothermic — they rely on external sources of heat to maintain body temperature. They are most active at warmer temperatures and prefer 82o to 92o F (28o to 33o C). They stop feeding when ambient temperature drops below 70o F (21o C), and become dormant below 55o F (13o C).

Alligators begin courtship in April throughout most of their range, and breed in late May and early June. Females lay a single clutch of 30 to 50 eggs in a mound of vegetation from early June to mid-July. Nests average about 2 feet (0.6 m) in height and 5 feet (1.5 m) in diameter. Nests are constructed of the predominant surrounding vegetation, which is commonly cordgrass (Spartina spp.), sawgrass (Cladium jamaicense), cattail (Typha spp.), giant reed (Phragmytes spp.), other marsh grasses, peat, pine needles, and/or soil. Females tend their nests and sometimes defend them against intruders, including humans. Eggs normally take 65 days to complete incubation. In late August to early September, 9- to 10-inch (23- to 25-cm) hatchlings are liberated from the nest by the female. She may defend her hatchlings against intruders and stay with them for up to 1 year, but gradually loses her affinity for them as the next breeding season approaches.

Alligators are not normally aggressive toward humans, but aberrant behavior occasionally occurs. Alligators can and will attack humans and cause serious injury or death. Most attacks are characterized by a single bite and release with resulting puncture wounds. Single bites are usually made by smaller alligators (less than 8 feet [2.4 m]) and result in an immediate release, possibly because they were unsure of their intended prey. One-third of the attacks, however, involve repeated bites, major injury, and sometimes death. Serious and repeated attacks are normally made by alligators greater than 8 feet in length, and are most likely the result of chase and feeding behavior. Unprovoked attacks by alligators smaller than 5 feet (1.5 m) in length are rare.

Contrary to popular belief, few attacks can be attributed to wounded or territorial alligators, or females defending their nests or young. Necropsies of alligators that have attacked humans have shown that most are healthy and well-nourished. It is unlikely that alligator attacks are related to territorial defense. When defending a territory, alligators display, vocalize, and normally approach on the surface of the water where they can be more intimidating. In most serious alligator attacks, victims were unaware of the alligator prior to the attack. Female alligators frequently defend their nest and young, but there have been no confirmed reports of humans being bitten by protective females. Brooding females typically try to intimidate intruders by displaying and hissing before attacking.

Alligators quickly become conditioned to humans, especially when food is involved. Food-habituated alligators lose their fear of humans, and can be dangerous to unsuspecting people, especially children. Many aggressive or “fearless” alligators have to be removed each year following feeding by humans. Ponds and waterways at golf courses, and high-density housing, create a similar problem when alligators become accustomed to living near people.

The American alligator is found in wetlands throughout the coastal plain of the southeastern United States. Viable alligator populations are found in Texas, Oklahoma, Arkansas, Louisiana, Mississippi, Alabama, Florida, Georgia, South Carolina, and North Carolina. The northern range is limited by low winter temperatures. Alligators are rarely found south of the Rio Grande drainage. Alligators prefer freshwater, but also inhabit brackish water and occasionally venture into salt water. American crocodiles are scarce, and in the United States, are only found in the warmer coastal waters of Florida, south of Tampa and Miami. Caimans rarely survive winters north of central Florida, and reproduce only in southernmost Florida.

Alligators can be found in almost any type of freshwater, but population densities are greatest in wetlands with an abundant food supply and adjacent marsh habitat for nesting. In Texas, Louisiana, and South Carolina, the highest densities are found in highly productive coastal impoundments. In Florida, highest densities occur in nutrient-enriched lakes and marshes. Coastal and inland marshes maintain the highest alligator densities in Georgia, Alabama, and Mississippi. Alligators commonly inhabit urban wetlands (canals, lagoons, ponds, impoundments, and streams) throughout their range.